David Guetta, the best-selling DJ in the world, wanted help from football fans for recording his official anthem for the European Championship 2016, which was held and played in his native country, France. DJ and producer David Guetta called to gather one million fans to record the official UEFA Euro 2016 anthem with him.

As a musical ambassador of UEFA Euro 2016, Guetta has been commissioned to create a new soundtrack for the summer’s 2016th European Championship and tried to get as many fans as possible to work on this track. 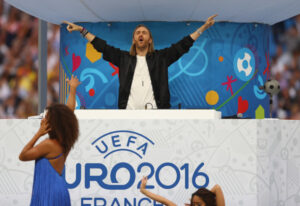 All submitted recordings were mixed personally by Guetta in the UEFA EURO 2016 anthem ‘This One’s For You’. The song was released in spring 2016. Prior to the UEFA Euro 2016 draw, Guetta said: “I am pleased and delighted to have been working on this project with UEFA in my native country. UEFA EURO 2016 is all about the fans, and I want to get them involved as much as possible, especially when it comes to music. That’s why I’m trying something unique and asked fans from all over the world to celebrate this football party with me and be part of the official track. “

The Frenchman, who writes and produces the song, is the figurehead of UEFA’s worldwide musical campaign. This will also include performances at the opening and closing ceremonies, a free concert in the middle of Paris on the Champs de Mars under the Eiffel Tower and an interactive experience as part of the UEFA EURO 2016 Trophy Tour. All fans who participated have received a unique personal memory; a did make a chance to win tickets to the opening match of UEFA EURO 2016 at the Stade de France and a meeting with David Guetta.

And there is more David Guetta

But it doesn’t stop there. The winner can attend his concert as a VIP on the Champs de Mars, under the Eiffel Tower. The official track of UEFA EURO 2016 was heard throughout the tournament, such as on TV before and after each football match during the UEFA EURO 2016. David Guetta also played the song personally during the opening and closing ceremonies, and during his free concert in Paris.

The most popular DJ in the world invites you to participate in the recording of the official anthem of the continental tournament, which will take place in France, his country of origin
David Guetta, DJ with global reach and music producer, has made a call this Saturday to a million fans who will be able to record with him and be part of the official song of UEFA Euro 2016.

Guetta is the musical ambassador for UEFA Euro 2016 and he has been tasked with creating the soundtrack for the tournament that will take place next summer with the aim of gathering as many fans as possible on the song.

Guetta will collect fans’ recordings and blend them into his UEFA Euro 2016 anthem ‘This One’s For You’, which will be released in spring next year.

Looking ahead to today’s UEFA Euro 2016 tournament, the DJ said: “I am very excited to be working with UEFA on this project in my home country. UEFA Euro 2016 is for the fans and I want them to become the heart of all this, especially of music “.

“So I’m trying something very special and asking fans around the world to celebrate this football festival by being part of this official song.”

The Frenchman, who will write and produce the song, will be the public face of this global UEFA music campaign that will also include live performances at the Stade de France in the opening and closing ceremonies, a free concert for fans in central Paris under the Eiffel Tower and an interactive experience as part of the UEFA Euro 2016 Trophy Tour.

All fans who record will receive a unique and personalized piece of artwork and will be entered into the drawing for tickets to the opening match of UEFA Euro 2016 and the Stade de France for a chance to meet David himself.

Not only that, the winner will be a VIP guest at their free concert during the tournament on the Champ de Mars, under the Eiffel Tower.

The official UEFA Euro 2016 song will be played throughout the tournament, including opening and closing sequences for all television broadcasts of the matches. David Guetta will perform breathás and read the opening and closing ceremonies and at the Paris concert.